The Coolamon (Syzygium moorei), a threatened species, is one of the most beautiful and unique trees found in our critically endangered Big Scrub lowland subtropical rainforest.  Growing to 40m high, the Coolamon exhibits a spectacular floral display between November and February with orange-red to pale pink flower clusters forming on old branches that are bereft of leaves (as opposed to the more common formation of flowers that develop on new branches and shoots).  This unusual flowering strategy, known as ‘cauliflory’, is more commonly seen in tree species found in tropical climes but rarely in the subtropics. 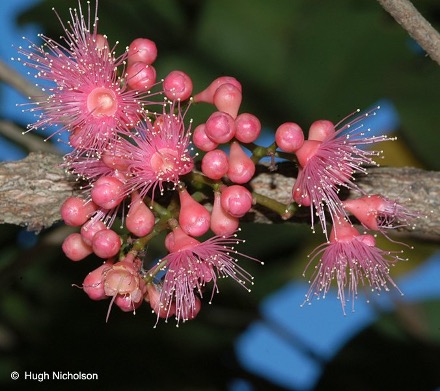 The Coolamon’s bark comprises soft papery scales and ranges in colour from red-brown, grey to pinkish-grey.  The crown of the tree is dense and its leaves are large (9-23cm long), leathery and glossy dark green with a blunt point at their apex and often possess a red or purple coloured petiole.  Coolamons produce large clusters of globular-flattened greenish-white fleshy fruits that measure up to 6cm in diameter, contain 1 large sized seed and have an annual fruiting period generally between March and May.  These fruits are believed to have once been dependent on now-extinct subtropical cassowaries for dispersal and are edible (albeit without much flavour).  It has also been suggested that the fruit were a traditional food source for Aboriginal people and that the leaves and bark were used for medicinal purposes. 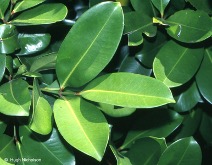 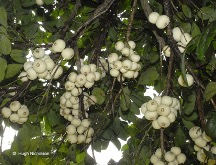 The Coolamon is naturally found in riverine and gully habitats of lowland subtropical rainforest in a restricted range between the Richmond River Valley in NE NSW to Mudgeeraba in SE Qld.  Unfortunately this beloved tree is nowadays a threatened species with both State and Commonwealth listings as Vulnerable.  With the Coolamon facing multiple threats, including a lack of genetic diversity due to the small isolated populations that remain in a now highly fragmented landscape and competition from a multitude of weed species, there is an urgency to conserve this species, amongst many other lowland subtropical rainforest species, to ensure this iconic species is not lost forever.

To help save the stunning Coolamon and its critically endangered lowland subtropical rainforest habitat from extinction, Big Scrub Rainforest Conservancy is including this iconic tree in its flagship program, Science Saving Rainforests.  The Science Saving Rainforests Program utilises the latest DNA sequencing techniques and genome analyses to identify populations across the entire range of 60 rainforest flora species (30 key structural, largely canopy species and 30 threatened species) that possess the optimal genetics to avoid inbreeding depression and best cope with predicted future climate change conditions, new pests and emerging diseases.  Propagules (seed, juveniles or cuttings) will then be collected from identified populations and propagated for inclusion in our living seedbank plantation which will provide genetically-informed planting stock for use in future ecological restoration projects for lowland subtropical rainforest.  We are very excited to announce the inclusion of the Coolamon in our Science Saving Rainforest Program, which will help preserve this magnificent tree species for future generations to enjoy.  We welcome your support for the Science Saving Rainforests Program – should you wish to donate please click here.

Check-out our resources to help you on your way, like our Rainforest Restoration Manual, tree identification page and our beautiful coffee table book ‘A Journey Through Time’.

Sign up and receive the latest news from Big Scrub
Rainforest Conservancy.